We somehow look upon the notion of surrendering to a greater authority and greater power as something to be avoided. The idea of being subordinate to anything other than our own will and desire is looked upon as weakness or folly.  Whether we consider ourselves in relation to institutions or the laws of nature, we somehow consider it okay to ‘play along’ as long as the rules don’t get in our way, and restrictions don’t apply to us.  We are in control, and as such, we shouldn’t surrender our will or desire to anything.

So another liturgical year draws to a close and we celebrate with the feast of Christ the King! The time flies, and with it, the illusion that somehow, in some way, we are the masters of our own destiny!  As a society and people, we somehow delude ourselves into thinking that we control our lives and everything around them; time is the great equalizer in that regard.  We can’t slow it down or roll it back; we can’t speed it up or make it stand still. Everything in our mortal, physical existence , for good or ill, begins, grows, decays, and withers – that is the nature of the physical world.  That is not ‘a’ truth – that is ‘the’ truth.

No less than in mathematics, when children are learning their basic tables (if in fact they still do that in a school district near you without the aid of computers and calculators), the principles that govern something as simple as addition; one plus one equals two.  This is what students are taught by the teacher – there is not a debate or discussion – the teacher doesn’t conduct a survey to determine if this principle is acceptable or palatable to the students or not.  It is a simple fact – and when it comes to the adding of one and one, the truth is, the answer is two.

During the celebration of Mass this feast day, the gospel writer tells us of Pilate’s question to Jesus – “truth? What is that?’  In reading this gospel, I have never been struck with the impression that Pilate was in the least interested in what Jesus’ answer would be – he wasn’t seeking to know or come closer to understanding Jesus.  I’ve often thought of it as a sad question; a question from one who, despite the trappings of power and position and privilege, is still frightened and lost and alone.  I’ve thought of it as a sarcastic, bitter response from someone who has actually closed themselves off to the wondrous possibilities that exist when we allow God to move in our own lives.

For those who refuse to listen to His voice, to listen to the Truth, how sad it must be.  I reflect back on my own early adulthood when there was a time that I wasn’t that interested in moving more closely into that relationship that I was being invited into; and when I honestly look at that period, those were the saddest times of my life. There was no real sense of hope, of a future, or of a love greater than my own.

His voice is always out there, calling each person.  We can refuse to listen or we can be open to the wondrous possibilities inherent in that invitation to relationship.

He leaves that choice to each of us, for good or ill. That’s real love.

That’s the sort of King that I don’t mind surrendering to. 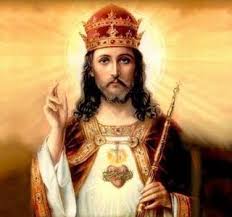 Praised be Jesus Christ, now and for ever!